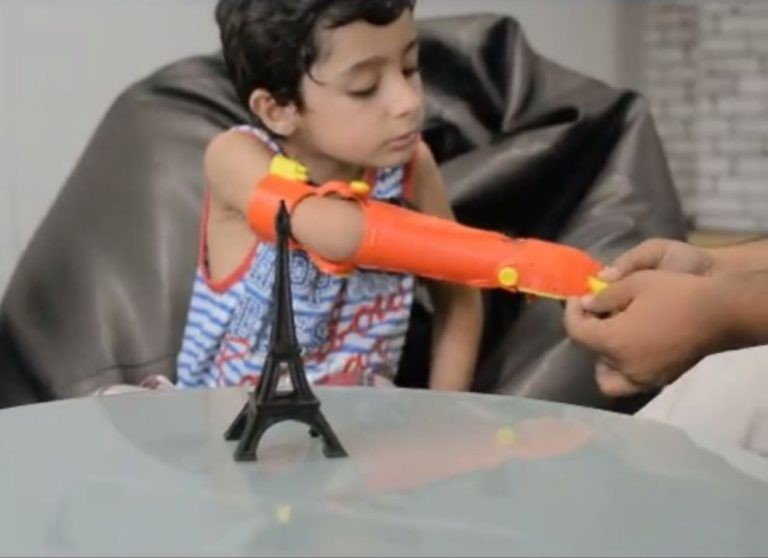 Bioniks has produced the first 3D printed prosthetic arm in Pakistan and now it has launched a crowdfunding campaign to take its ‘Real Life Superhero’ concept to the masses. Five-year-old Mir Bayyan received the first 3D printed arm in the country and when it finally arrived, the young Iron Man fan was amazed to see that it came in red and yellow with a torch. It’s a simple touch that has gone a long way to restoring the child’s confidence. Now the company wants to expand the concept and give disabled children the chance to feel like a hero.

Anas Niaz and Ovais Qarashi launched Bioniks after seeing how 3D printing could slash the cost of each individual prosthetic limb and help tailor the limb to the individual. They worked with open source prosthetics and then came up with their own twist to improve upon the basic concept. Niaz said: “We are providing 3D printed prosthetics in Pakistan.

The ground for improvement

It’s easy to see why 3D printing has taken off in the prosthetics world, but in Pakistan it’s very difficult to get 3D printed prosthetics and we are trying to change that.” By their own admission, the first arm isn’t perfect. It has given Bayyan a new lease of life, but the hand is relatively crude and the team knows it can improve upon the basic design. For that, Bioniks has launched a crowdfunding campaign on ZingoHub to raise $5000. With that small cash investment, the team can perfect the design of the Iron Man arm and create several more. “We’re not just providing them with a prosthetic hand, we’re boosting their confidence,” said Oarashi. “It isn’t just in Pakistan. When children around the world have to endure an amputation, they can be tempted to hide away. It hits their confidence.” Bayyan received a relatively simple prosthetic right forearm and hand that is a long way behind the traditional prosthetics children in the US and other first world nations might receive.

However, this relatively straightforward device has given the young child the chance to lead a relatively normal life. The integrated ‘laser beam’, meanwhile, is a unique touch that has restored a little pride. It’s also an interesting example of mass customization. The child can choose the basic design, depending on their favorite superhero, and then the team can scale and customize their particular prosthetic in terms of the final fit. No two amputations or birth defects are exactly alike and the ability to tailor the prosthetic can make a real difference in terms of the comfort and functionality. Recent advances in 3D design software, combined with constant improvements in the hardware, means that 3D printing can provide a custom fit that we just can’t achieve with traditional manufacturing methods. We’ve seen this type of mass customization elsewhere recently, with the e-NABLE Raptor. That is a low-cost prosthetic that the open source community has taken to its heart and it is one of the pioneers of the 3D printed prosthetic movement. It, too, was designed for people in developing nations and war-torn countries. e-NABLE has stayed true to its roots and continues to supply hands to those in need to this day.

Bioniks is keen to focus on the children of Pakistan at first and will continue to refine the relatively simple design that means it can supply hands at a lower unit cost. Over time, though, and with the help of the open source community, there’s no reason why this relatively simple concept cannot grow into something much larger. “We really want to make something different and make this world a happier place,” said Diaz. By the look on Mayyan’s face, they have already achieved that goal.

Bioniks has produced the first 3D printed prosthetic arm in Pakistan and now it has launched a crowdfunding campaign to take its ‘Real Life Superhero’ concept to the masses.